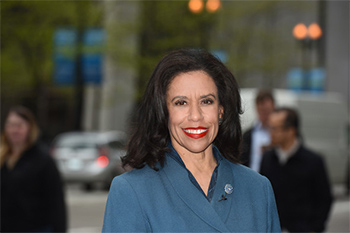 Leslie J. Sawyer is President and CEO of Environmental Design International inc. (EDI), and has been leading the firm since August 2016 after serving nearly 20 years on EDI’s Board of Directors. As businesses grappled this year with the historic challenges of the Covid-19 pandemic and civil unrest, EDI will be finishing out 2020 without staff layoffs, and increased revenue with a 100% increase in profits under Leslie’s leadership.

Like her late sister Deborah M. Sawyer who founded EDI in 1991, Leslie is devoted to encouraging students in underserved communities—especially diverse young women—to pursue Science, Technology, Engineering, and Mathematics (STEM) education and subsequent career paths. She is also deeply committed to supporting other woman-owned and minority-owned businesses grow and flourish.

These passions are reflected in Leslie’s board and community service that included Innovations in Construction, Asphalt & Transportation (ICAT) which strongly advocated for woman and minority-owned construction and engineering firms in Illinois. While ICAT ended its operations earlier this year, Leslie had been an active member for nearly five years. She served on several affiliated boards and committees including the ICAT Board and the ICAT Executive Board. She also co-Chaired the group’s 2018 Inaugural Women’s Summit. Each year since 2017, Leslie funded and chaired the selection committee for the Deborah M. Sawyer – ICAT STEM Student Scholarship Awards for college-bound disadvantaged Peoria High School students.

Leslie is also an Associated Colleges of Illinois (ACI) Board of Trustees, Executive Committee, and Program Committee Member. ACI is a nonprofit that “advances independent liberal arts and sciences education, and supports underserved students to succeed in college, careers, and life.” The missions of ACI and EDI intersect on education, especially STEM education, for disadvantaged and diverse students. To that end, Leslie privately, and through EDI, has funded the Deborah M. Sawyer and Leslie J. Sawyer scholarship for STEM students enrolled in ACI member colleges and universities.

On March 28, 2019, Leslie was appointed to the State of Illinois DBE Task Force, established by the Illinois State Senate.

Leslie is also an active supporter and Governing Board Member of Gilda’s Club Chicago. She participates in fund-raising efforts to enable the organization’s support and programming for cancer patients and their loved ones.

The importance of community service was instilled in Leslie at a young age growing up in Ohio. Her early volunteer activities included tutoring disadvantaged students enrolled in elementary through high school. As a student at Lake Forest College, Leslie continued tutoring inner city students who resided in the Robert Taylor Homes and Cabrini Green. This commitment to community service carried through her professional career in Ohio, where she served on numerous boards and was engaged in philanthropic and volunteer activities to support educational opportunities, advocacy for women and children, women’s health, senior care, food pantries, domestic abuse survivors, and other organizations addressing challenges in the community.

About EDI: Founded in 1991, Environmental Design International inc. (EDI) is professional engineering firm headquartered in Chicago. EDI’s team of engineers and scientists offer a variety of environmental, engineering, industrial hygiene, and survey services to clients within the private and public sectors.