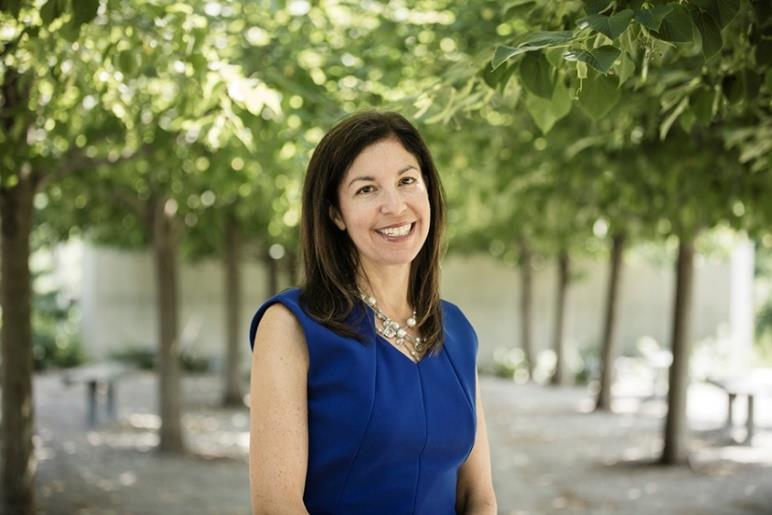 Susan Abrams was appointed CEO of Illinois Holocaust Museum & Education Center in April 2014, with more than 25 years of nonprofit, for-profit, and business management experience. Under Susan’s leadership, the Museum is leading globally in Holocaust and museum education, recently opening the groundbreaking four-gallery exhibition, the Take a Stand Center, including the interactive, holographic Abe & Ida Cooper Survivor Stories Experience. To support this new exhibition and other Museum goals, with Abrams’ leadership the Museum launched in 2015 and completed in 2017 its $30 million Commit to the Future Capital Campaign.

Susan was recognized as one of Chicago’s 25 Most Powerful Women (Better, 2019), as an Influential Woman in Business (Daily Herald Business Ledger, 2017), and as Innovator of the Year and Executive of the Year (Stevie Awards for Women in Business, 2016), and under her leadership, the Museum was recognized as Leader Institution of the Year (Illinois Association of Museums, 2016) and received a 2017 National Medal from the Institute of Museum and Library Services, the nation’s highest honor for a museum. In 2018, the Museum received the prestigious Media and Technology GOLD Muse Award (American Association of Museums) for its Abe & Ida Cooper Survivor Stories Experience, and the Chicago Innovation Award. The Museum also was recognized in the 31st Annual Excellence in Exhibition Competition for “Special Achievement, Innovative Interpretation, and Community Co-Curation” for Stories of Survival: Object. Image. Memory. (American Association of Museums, 2019).

Susan previously served as the COO for JCC Chicago where she oversaw the revitalization and growth of the $34 million organization’s businesses (including day camps, $9M; early childhood, $8M; conference center and overnight camp, $4M; and more) executed at over 30 Chicagoland locations. Susan has held leadership positions at Northwestern University and Chicago Children’s Museum, where she was instrumental in the planning and execution of the museum’s move to Navy Pier. She also has worked as a consultant at McKinsey & Company and an analyst at Goldman Sachs.

Ms. Abrams holds an MBA degree from Northwestern University’s Kellogg School of Management where she was an Austin Scholar and an Ardis Krainik Scholar, a BSE from the Wharton School and a BA from the College of Arts & Sciences at the University of Pennsylvania where she was a Benjamin Franklin Scholar. She is the author of The New Success Rules for Women: 10 Surefire Strategies for Reaching Your Career Goals (Random House, 2000) and regularly speaks to students, alumni, and corporate groups on related topics.

Abrams serves, through the Governor’s appointment, on the Illinois Holocaust and Genocide Commission. She is a member of the Economic Club of Chicago, The Chicago Network, and Northwestern’s C100. Abrams previously served on the Chicago Children’s Museum Board of Directors, the Board of Advisors for Kellogg’s Center for Nonprofit Management and for Kellogg’s Women’s Business Association, and the Board of Directors and Board of Advisors for Leadership Illinois, for which she was in the Class of 1997.