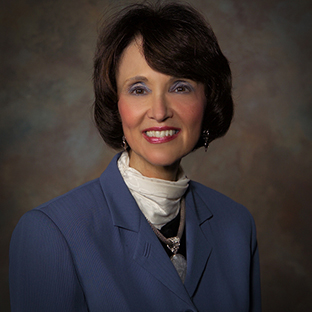 Stephanie Pace Marshall is the Founding President and President Emerita of the Illinois Mathematics and Science Academy® — the nation’s first three-year public residential institution for high school age students academically talented in science, mathematics and technology. She was also the founding president of the National Consortium for Specialized Secondary Schools in Mathematics, Science and Technology, and was a president of the Association of Supervision and Curriculum Development (ASCD), one of the world’s largest international education associations.

Today she is internationally recognized as a pioneer and innovative leader and teacher and an inspiring speaker and writer on leadership, learning and schooling, STEM education and talent development, innovation, and the design of generative and life-affirming learning organizations.

Dr. Marshall has worked in every level of education: superintendent of schools, a district curriculum administrator, a graduate school faculty member, and an elementary and middle school teacher. She earned a B.A. from Queens College, M.A. from the University of Chicago, and a Ph.D. from Loyola University of Chicago, and she received four honorary doctorates in science and in arts and letters.

She is the author of over 35 published journal articles, an author for the Drucker Foundation’s series Organizations of the Future, an editor and author of Scientific Literacy for the 21st Century, and a contributor to Learning and Understanding: Improving Advanced Study of Mathematics and Science in U. S. High Schools. She is featured in the book, Leaders Who Dare: Pushing the Boundaries and is the inspiration behind the novel, Smart Alex, a story of an adolescent girl talented in mathematics. Her book, The Power to Transform: Leadership that Brings Learning and Schooling to Life, received the 2007 Educator’s Award from The Delta Kappa Gamma Society International.

Dr. Marshall received two resolutions from the Illinois General Assembly for outstanding contributions to Illinois education, and she was elected into the Illinois Hall of Fame and into the inaugural Hall of Fame of Chicago Women’s Today. The Chicago Sun Times selected her as one of the ten most powerful women in education and one of the 100 most powerful women in Chicago. She was recognized by the RJR Nabisco Corporation as one of the nation’s most innovative educational leaders and by the National Association of School Boards as one of North America’s “100 Top School Executives.”

At the invitation of Mikhail Gorbachev, she became a member of the State of The World Forum, an international “think-tank” designed to study and resolve issues impacting global sustainability. President William Jefferson Clinton invited her to become a member of the Clinton Global Initiative (CGI), a non- partisan cadre of “the world’s most influential leaders committed to strengthening the capacity of people throughout the world to meet the challenges of global interdependence.” Her current CGI work involves a partnership with Toronto-based Free The Children to build and equip the first residential secondary school for girls in the Masai Mara in Kenya, which will open in 2011.

She is a fellow of the Royal Society for the Encouragement of Arts, Manufacturers, and Commerce in London, England and serves on the board of the Queen Noor Jubliee School’s Foundation in Amman, Jordan, and several other foundation and corporate boards in the United States. She is a Trustee of the Society for Science and the Public, a member of the Advisory Board of Games for Change, and a charter member of the Advisory Board for AECT’s Initiative FutureMinds: Transforming American School Systems and The Innovation Council of Chicago. She serves as an advisor to The Thornburg Center for Space Exploration, the Chicago Metropolitan Agency’s Plan for Higher Education, and the American Psychological Association’s Study of the Impact of Specialized Public High Schools of Science, Mathematics & Technology.

Dr. Marshall is a member of numerous corporate and civic groups in Chicago including the Economic Club, The Commercial Club, The Executives Club, and The Chicago Network. She is a member of the Board of Directors of Tellabs, Inc. and Sentry Insurance, and is a member of the Tellabs Foundation, the IMSA Fund for the Advancement of Education, and is a Vice-President of The Fry Foundation in Chicago. She continues to consult with national and international foundations, policy leaders and practitioners as a “thinking partner”—helping to move possibilities to practice.

As a result of her achievements, she was inducted into the Lincoln Academy of Illinois and was designated a Laureate of the Academy, the state’s highest award for achievement that “contributes to the betterment of mankind.”