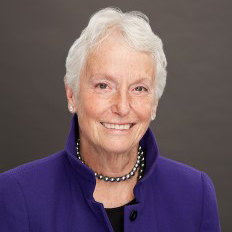 Sheli Z. Rosenberg is a principal with Roselin Investments. Prior to January 1, 2014, she was a member of the Skadden, Arps, Slate, Meagher & Flom LLP Real Estate Group, having joined the firm’s Chicago office in 2011. Sheli is the former president, chief executive officer and vice chairman of Equity Group Investments, L.L.C. She joined EGI in 1980 as the company’s general counsel and rose to become CEO before retiring in 2003. Prior to joining EGI, Sheli was one of six managing partners at Schiff Hardin & Waite, Chicago, specializing in real estate, finance, and corporate law, and was the first woman to become a capital partner at that firm.

Ms. Rosenberg serves on the board of directors/trustees of a number of public and private corporations, foundations, and community and charitable organizations.

She is a forceful advocate for women in business and is past president of The Chicago Network and director of The National Partnership for Women & Families and The Women’s Issues Network Foundation. Sheli is a co-founder and former president of the Center for Executive Women at Kellogg Graduate School of Management. She earned a BA in History and Government from Tufts University, and a JD from Northwestern School of Law.