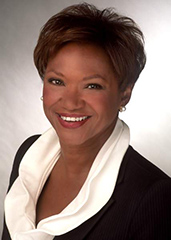 Sheila Talton is an innovative global leader with over 30 years of experience in helping organizations increase value through breakthrough applications of technology. She is an accomplished business and market builder with a solid track record fueled by expertise as a multi-faceted technology leader, Big Data strategist, and specialist in emerging markets and global partner networks.

The expertise she’s developed through her varied career has equipped her for optimum positioning within key current technology trends. She brings distinctive grounding in the specific range of technologies required to understand and fully exploit the uses of data analytics, cloud computing and SaaS services in multiple vertical markets. Her expertise includes the understanding of all the components of Big Data including servers, systems and applications software, knowledge management, communications networks, data bases and software tools.
She is the CEO of Gray Matter Analytics, a consulting firm she formed in 2013 to take advantage of what she feels is today’s biggest business opportunity, using technology as an enabler. Gray Matter collaborates with customers exclusively in the healthcare and financial services industries to allow them to create data-driven organizations and to benefit from more intelligent insights from data assets.

Ms. Talton began her career by identifying technology as the key area of future business growth and credentialed herself with stints at several information technology companies before forming her own company, Unisource Network Services, in 1987 to take advantage of the emerging demand for networking services in an era of deregulation. She became one of the pioneers in defining the network integration consulting segment and her career paralleled the growth cycle of the business, beginning with the early days of local area networks and continuing through development of sophisticated communications systems for the Euro-Tunnel.

As network services began to be handled through large companies, Ms. Talton was recruited into CapGemini Ernst & Young as Vice President to lead their Midwest Technology Practice and then EDS, where she served in multiple leadership roles, including as head of the Consumer Products/Retail Industry outsourcing business. As president of the EDS Business Process Innovation Global Consulting Practice she was able to combine her technology product and consulting expertise to design their first Solutions Consulting Practice, a $6B business, and to gain experience to position herself in the global arena.

She joined Cisco Systems in 2004 and emerged as a leader in pivotal roles as the company transformed itself from a product to a solutions-focused company and an innovative global player. She was recruited as Vice President Advisory Services to build the company’s consulting capability. She globalized leadership and built consensus for cross-functional buy in with product groups by developing an innovative multiplier to demonstrate the added profit impact of services paired with products. She was soon recruited by Cisco’s Chief Globalization Officer to serve as the group’s first Globalization Officer in China, where she developed the initial phase of the company’s multi-billion dollar investment in that country. She served on the China Board, a body chaired by the CEO. She then moved to the company’s Office of Globalization to develop Cisco’s strategy for Latin America. She served on the Emerging Countries Council, the Services Solution Board and the boards that represented all the functional lines of business implementing the company’s expansion into Brazil and Mexico.

In 2011, realizing that the innovation in technology was coming out of more agile firms, she became President of SGT, Ltd. (Strategy, Globalization, Technology), a consulting firm she formed to build new services and products to create additional value and market differentiation for large global companies in financial services, healthcare, and technology industries, with a specialty in emerging markets. She also took on a concurrent role as an Executive in Residence of Sterling Partners, a $5B private equity firm, where she was responsible for building the firm’s strategy and investment thesis for business intelligence/Big Data, and for deal sourcing for these investment opportunities in healthcare and other industry verticals.

Ms. Talton is a member of the National Association of Corporate Directors (NACD); the Women Corporate Directors (WCD); the World’s President’s Organization; The Economic Club of Chicago; The Chicago Network; the Chicago Council on Global Affairs; and The Executive Leadership Council, a network and forum for African American executives of Fortune 500 companies.

She is experienced in governance in corporate, civic and not-for-profit arenas, currently serving on the boards of Wintrust Financial Corporation (NASDAQ:WTFC), OGE Energy Corp. (NYSE:OGE), Acco Brands Corporation (NYSE:ABD), Chicago’s Northwestern Hospital Foundation, the Chicago Shakespeare Theater and the Chicago Urban League. Previously she served for ten years on the board of the Rensselaer Polytechnic Institute, one of the country’s leading technology universities. She was also a founding member and chairperson of the Information Technology Senior Management Forum where she continues to serve on their advisory board. She is on the Advisory Committee to the Board Selection Committee for Agenda, a Financial Times Company.

Her honors include selection as a Congressional appointee on the US White House Women’s Business Council, as one of the “Top 10 Women in Technology” by Enterprising Women, and as “Entrepreneur of the Year” by the National Federation of Black Women Business Owners. She is also a recipient of the “Entrepreneurial Excellence Award” from Working Woman magazine and a Dr. Martin Luther King Jr. Legacy Award. She was named a 2007 “Woman Worth Watching” by Profiles in Diversity Journal, received a 2008 Egretha Award from the African American Women’s Business and Career Conference, and was named a 2009 Business Leader of Color by Chicago United. In 2010 she was honored as a Woman of Achievement by the Anti-Defamation League, and as the Outstanding College Alumni of the Year by the Business School of Northern Illinois University. In 2011 she was named one of “25 Influential Black Women in Business” by The Network Journal and received the “Diamond Leadership Award” from the Information Technology Senior Management Forum.

Ms. Talton is a frequent speaker at universities including Pepperdine, Northern Illinois and Radford Universities, and corporate groups including The Executives’ Club of Chicago, the Marathon Club, The Women’s Business Council of Molex Incorporated and the Annual Executive Global Summit of Kelley Services. She has been cited

in publications including CIO Magazine, Network Magazine, Crain’s Chicago Business and Black Enterprise.
She is a graduate of the Advanced Management Program of Harvard Business School and Northern Illinois University.