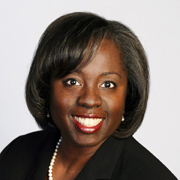 Patricia Brown Holmes is the first African-American woman to lead and have her name on the door of a major law firm that is not women- or minority-owned. She is a highly respected and accomplished lawyer who focuses her practice on the areas of high-stakes commercial litigation, white collar crime, and legal client counseling. As a former state court judge and experienced prosecutor and defense lawyer, she brings a unique variety of capabilities to her practice. Patricia’s comprehensive trial experience, coupled with her deft management abilities, position her as a valuable advocate and trusted adviser to her clients.

Prior to serving as an associate judge in the Circuit Court of Cook County, Patricia was an Assistant U.S. Attorney and an Assistant State’s Attorney. She is one of only a handful of attorneys in the State of Illinois who has tried cases in state, city, and federal court as well as state appellate, federal appellate, and state supreme courts.

Patricia has practiced in courtrooms at every level – as a prosecutor, defense attorney, and as a judge. Given her familiarity with sensitive legal matters, she is also especially qualified to conduct internal investigations. Applying sound judgment, creative strategies, and common sense, Patricia navigates complicated and delicate legal matters with appropriate discretion and poise.

As chair of her former firm’s Diversity Committee, Patricia also spearheaded and encouraged diversity initiatives at the firm. Due to her efforts, the firm won multiple local, regional, and national awards that recognized its commitment to diversity and inclusion.

Patricia served as an associate judge of the Circuit Court of Cook County for nine years. She previously served the City of Chicago as its Chief Assistant Corporation Counsel for Municipal Prosecutions, supervising a staff of attorneys practicing in chancery and municipal courts. Earlier, Patricia honed her skills in federal court, having tried more than 26 complex felony cases and argued numerous times before the Seventh Circuit Court of Appeals as an Assistant U.S. Attorney for the Northern District of Illinois. She also gained significant trial and appellate experience as an Assistant State’s Attorney for Cook County, IL, arguing twice before the Illinois Supreme Court.