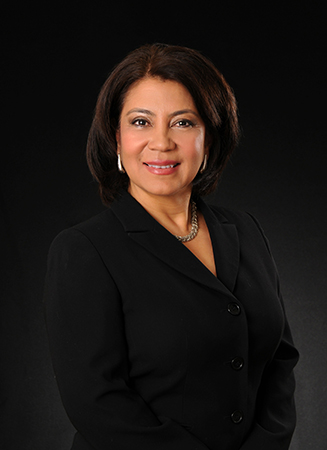 Maricela García is the Chief Executive Officer of Gads Hill Center, a community based organization founded in 1898 that creates opportunities for children and their families to build better lives through education, access to resources, and community engagement. Ms. García has more than twenty years of experience in nonprofit management leading organizations through start-up, turnaround, and expansion.

Ms. García came to the United States in the early 1980s as a result of the war in Guatemala. After her arrival in the U.S., she founded Casa Guatemala to assist newly arriving refugees and later co-founded Women for Guatemala, an organization dedicated to building solidarity among women in the U.S. with emerging women’s organizations in Guatemala. As a member of the Peace and Justice Committee, she engaged the international community in monitoring and upholding human rights in Guatemala by advocating at the United Nations General Assembly and Committees during the 1980s.

Ms. García has served on various boards and councils including the National Immigration Forum, the National Network for Immigrant and Refugee Rights, Northwestern University Human Rights Center, the Chicago Community Renewal Society, Illinois Partners for Human Services, and Chapin Hall at the University of Chicago.

​Ms. García holds a Bachelor of Arts degree in Public Administration from Northeastern University and a Master’s degree in Social Work from the University of Illinois at Chicago. In addition, she was a policy fellow at Harvard University’s Kennedy School of Government.

Ms. García has been the recipient of several fellowships and awards, including the Chicago Community Trust Senior Leader Fellowship, National Hispana Leadership Institute Fellowship, Leadership Greater Chicago Fellowship, Latinos of the Southwest Excellence in Leadership Award, and Casa Guatemala Human Rights Award. In 2001, Chicago Woman Magazine nominated Ms. García as one of the 100 most prominent leaders making a difference in the quality of life of Chicagoans. The same year, she received the Bannerman Fellowship, which allowed her to study the correlation between economic development and migration in Mexico, Central America, and the United States. More recently, the Latino Policy Forum awarded Ms. Garcia in 2015 with the Champion of Change Award; that year, she was also presented with the Community Service Award for Tireless Service to the Latino Community at the 13th Annual Illinois Legislative Latino Caucus Foundation (ILLCF) Conference.

Ms. García has two children who are the inspiration of her life: Daniella and Camilo.