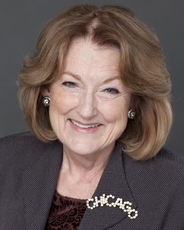 The Wall Street Journal called Lynne Nellemann part of “the watershed generation of women executives rising to the top.”She was the first female corporate officer in a Fortune 50company (International Harvester). Known for her leadership in corporate America, she was the first female chair of Procter & Gamble’s Trademarks and Patents Committee; founder of Gannett Work, the new products incubator group at Gannett, the parent media company for USA TODAY; holding corporate positions from VP to EVP; founder and president of the International Women’s Forum –Chicago, and one of the earliest members of The Chicago Network.

She was confirmed by Congress as one of 20Federal Glass Ceiling Commissioners,reporting to Cabinet level Secretaries of Labor in Republican and Democratic administrations. She knew her ‘bosses’ well. Secretary Lynn Martin was both an early member with her in The Chicago Network and Lynne’s neighbor in Chicago. Secretary Robert Reich and Lynne were Fellows in the School for Management and Strategic Studies (an international think tank), working together for decades.

Steve Forbes, Chief Executive Officer of Forbes magazine, has described Dr. Nellemann as “very much in touch with the mood of our country” and one who“truly has a grip on the reality of the world. ”Industry Week has written that she “separates real issues from gobbledygook” and has “broadened business skills constantly.” Throughout much of her corporate career, she has ‘paid it forward’ teaching Millennials, initiating courses in Leadership Studies (Dominican University) or Business Ethics (University of Illinois), as an Executive in Residence (Syracuse University),and as a tenure track professor and/or Lecturer(universities of Chicago, Northwestern and DePaul).

Lynne was recruited immediately after undergraduate studies into politics, winning an uphill battle for a multi-millionaire, conservative,Republican candidate from Texas, then served as his Media Director in Washington, DC.She holds an Honors’ BA in political science, B.J. and M.A degrees in journalism and a PhD in speech (alumnae along with Meghan Markel at Northwestern University). She has served on over a dozen private sector and philanthropic boards and been listed in almost a dozen Marquis Who’s Who directories starting with Colleges and Universities, then the Midwest, in America, Intellectuals, among Women and in the World.

The Nellemanns golf, fly-fish and have traveled to more than 100 countries. She is the mother of two 6’4” Millennial sons, both living in Chicago. Lynne’s ‘favorite eldest son’ has an investment banking background and is in equities management; her ‘favorite youngest son’ created his own commodities firm trading in futures and options. Her husband, David,has a son who was Chief Technology Officer for the Harvard company and a daughter who is a supply chain executive at Arizona State University.