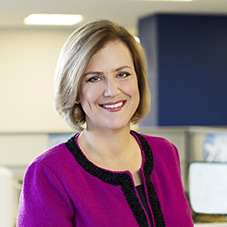 Linda Jojo is a proven executive who has served as the Chief Information Officer for complex, global, publicly traded and privately held organizations across a variety of industries.

Since 2014 Linda has served as Executive Vice President and CIO of United Continental Holdings (UAL). Her mandate is to deliver a strategy that improves and differentiates United’s operations and customer experience through the innovative use of technologies including mobility and data analytics, all while minding increasing cyber security requirements.

From 2011-2014, Linda lead the IT organization at Rogers Communications (RCI) in Toronto, ON. Rogers is a diversified communications and media company, including wireless voice and data communications services, cable television, high speed internet, radio and television broadcasting, sports entertainment, and digital media. She lead a technology strategy that moved customer interactions from traditional call centers and retail stores to an omni-channel experience and rolled out internet-based streaming media products.

Prior to joining Rogers, she was the CIO for Energy Future Holdings Corporation in Dallas, TX, joining in 2008, soon after TXU Corp was taken private. She was charged with leading the renegotiation and restructuring of its IT outsourcing arrangements, strengthening its IT infrastructure, and building a world class IT leadership team. From 2004-2008, Linda was CIO at Flowserve Corporation (FLS), a global manufacturer of engineered pumps and valves based in Irving TX. Operating in over 50 countries, Flowserve benefited from Linda’s leadership as she simplified & streamlined its IT operating footprint. She started her career at Digital Equipment Corporation, and spent nearly 15 years at General Electric.

Linda holds a bachelor’s degree in computer science and a master’s degree in industrial engineering, both from Renssalaer Polytechnic Institute, Troy NY.