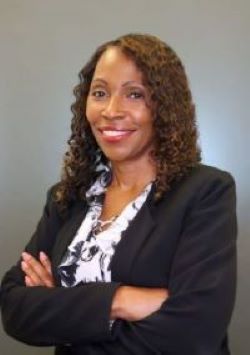 The first African American woman to serve as CEO of Metropolitan Pier & Exposition Authority (MPEA), Larita Clark has been blazing trails since she was a high school student. A native of Chicago, Larita grew up in West Garfield Park and was class valedictorian at Austin High School. Larita went on to attend Loyola University Chicago and Northwestern University’s Kellogg School of Management.

MPEA owns and operates McCormick Place, the Wintrust Arena, the Marriott Marquis Chicago, the Hyatt Regency Chicago, and an on-campus energy center. As North America’s largest convention center, McCormick Place welcomes nearly 3 million visitors every year and generates an economic output of nearly $1.8 billion each year. Larita is responsible for the financial, managerial, and administrative operations of each of these facilities on the McCormick Place campus.

Appointed in January 2020, Larita took the helms of McCormick Place just as the pandemic was beginning and successfully managed the campus through its greatest crisis ever. Larita’s leadership during the pandemic led to MPEA retaining valued client relationships and successfully re-booking nearly 70% of the cancellations from the pandemic while maintaining financial viability and preserving as many jobs as possible. In addition, she also led the charge at getting the entire McCormick Place campus accredited by the Global Biorisk Advisory Council, the gold standard for facilities in mitigating infectious diseases; only 70 convention centers in the United States have received this accreditation.

Prior to being appointed CEO, Larita served as Chief Financial Officer for MPEA. In that role, she provided leadership direction in MPEA’s strategy to become operationally self-sufficient and deliver incremental tax revenue to the City of Chicago and the State of Illinois. During her tenure with the Authority, Larita has held various financial positions, including Controller, Director of Finance and Administration of McCormick Place, and Assistant Controller. She began her career as an auditor with Peat Marwick Mitchell.

In addition to her professional achievements, Larita serves on the Board of Directors for Choose Chicago, Navy Pier, Inc., and the Near Southside Planning Board. In 2019, Crain’s Chicago business identified Larita as a Notable Woman Business Executive over 50. In 2021, Venues Now named Larita a Women of Live, and she was recognized at the 3rd Annual Women in Leadership Reception hosted by the Cleveland Avenue Foundation for Education.