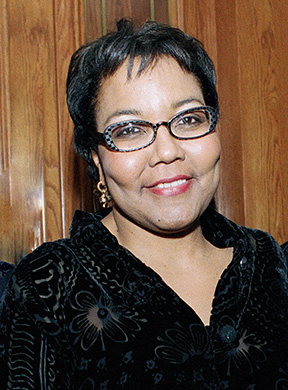 Born June 10, 1954 in Pittsburgh, Pennsylvania, Julieanna L. Richardson created a unique path to founding and heading up the largest national collection effort of African American video oral histories on record. With a diverse background in law, television production and the cable television industries, she combined her various work experiences and her passion for American Studies and history to conceptualize, found and build The HistoryMakers. The HistoryMakers is a national, 501(c)(3) non-profit educational institution headquartered in Chicago with regional offices in Atlanta, Georgia and the Washington, D.C. area. The HistoryMakers organization is committed to preserving, developing and providing easy access to an internationally recognized, archival collection of thousands of African American video oral histories. Richardson serves as the Founder and Executive Director of The HistoryMakers.

Richardson graduated from Brandeis University in 1976 with a B.A. in Theatre Arts and American Studies. It was during her studies at Brandeis that she first experienced the power of oral history, while conducting independent research on the Harlem Renaissance. While exploring the collections of the Schomburg Center for Research in Black Culture in New York City, Richardson interviewed Butterfly McQueen and Leigh Whipper as part of her project. Having access to these poignant life stories “made history really come alive for me,” says Richardson. “It is important that everyone have a sense of their own legacy.” From this early exposure, the seeds for The HistoryMakers project first took root.

Richardson received her J.D. degree in 1980 from Harvard Law School and began her career as a corporate lawyer at the law firm of Jenner & Block prior to serving in the early 1980s as the Cable Administrator for the City of Chicago’s Office of Cable Communications. There, she established the Chicago Cable Commission, the City’s regulatory body. She went on to found Shop Chicago, a regionally based home shopping channel. She then started her own production company, SCTN Teleproductions, which for eight years managed three local cable channels for TCI, then the nation’s largest cable operator, and served as the local production arm for C-SPAN. Richardson has been the recipient of numerous honors and awards. She currently sits on the Honors Council of Lawyers for the Creative Arts and she was appointed in 2011 to the Comcast NBC Universal African American Diversity Council.

The HistoryMakers represents the single largest archival project of its kind since the recording of former slaves during the WPA period of the 1930s. The purpose of this archive is to educate and to show the breadth and depth of this important American history as told by the first person; to highlight the accomplishments of individual African Americans across a variety of disciplines; to showcase those who have played a role in African American led movements and/or organizations; and to preserve this material for years and generations to come, creating a priceless collection of 15,000-20,000 of recorded African American testimony.