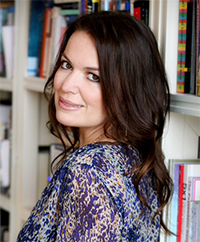 Julie Smolyansky has been President and CEO of Lifeway Foods NASDAQ (LWAY); the youngest female CEO of a publicly held firm in history since June 2002. Previously she was the Director of Sales and Marketing for Lifeway Foods, a position she held from September 1997. However, because she is also the daughter of Lifeway founder Michael Smolyansky, one could say Julie has actually been with this successful Chicago company from the very start. She has vivid memories of being an early ‘guinea pig,’ sampling new flavors and formulations, and traveling to food shows across the country to help her dad as he built his business into the only U.S. company ever taken public by a Russian immigrant.

Working with her father while he was alive and now to build on his successes and take Lifeway into the next generation is Julie’s focus. In her official position at Lifeway, Julie has begun working toward her ultimate goal to take Lifeway’s healthy, natural and organic kefir products from niche to mainstream with a new marketing, advertising, and public relations campaign that has been directly responsible for the growth of Lifeway Foods in the last 10 years.

Under Julie’s direction, Lifeway has seen an increase in sales of over 30 million dollars since she started with Lifeway Foods. Recently named one of Crain’s Chicago Business “Forty under 40,” her success is the result of good genes and solid training right here in Illinois. Julie is a graduate of the University of Illinois at Chicago (B.A., 1996), where she studied effects of advertising and cultural influences on consumer dieting behavior. She has presented research at the American Psychological Association’s Annual Meeting (1996), and has been a speaker at Nutracon’s Annual Anti-Aging Nutraceutical Conference, Chicwit a woman’s networking group, and the Global Dairy Congress. Julie serves on the Board of Directors for several organizations including the Anti-Defamation League, Hebrew Immigrant Aid Society a division of Jewish United Fund, and the Illinois Holocaust Museum and Education Center.

She is also a member of the Economic Club of Chicago, The Chicago Club, Young Presidents Organization, Committee of 200, The Chicago Network, and the Chicago Olympics 2016 Committee and member of the board for the International Probiotics Association. Previously, she served on the Board of Directors for a local Chicago community neighborhood, (RANCH Triangle Association) and has been an active volunteer for several woman’s organizations.

She lives in Chicago and in her spare time, Julie plays tennis and is an avid marathoner.