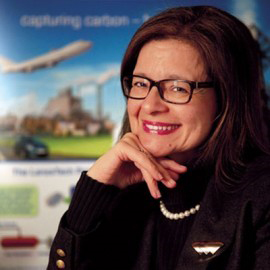 Dr. Jennifer Holmgren is the Chief Executive Officer of LanzaTech. Jennifer has over 20 years of experience in the energy sector including a proven track record in the development and commercialization of fuels and chemicals technologies. Prior to joining LanzaTech, she was Vice President and General Manager of the Renewable Energy and Chemicals business unit at UOP LLC, a Honeywell Company. In that role, she led UOP’s renewable business from its inception through to the achievement of significant revenues from the commercialization of multiple novel biofuels technologies.

Dr. Jennifer Holmgren is a member of the National Academy of Engineering and holds a B.Sc. degree from Harvey Mudd College, a Ph.D. from the University of Illinois at Urbana-Champaign and an MBA from the University of Chicago. She currently serves on multiple external advisory boards. She is the author or co-author of 50 US patents, 20 scientific publications and is the 2003 recipient of the Council for Chemical Research’s (CCR) Malcolm E. Pruitt Award.

In 2010, she was the recipient of the Leadership Award from the Civil Aviation Alternative Fuels Initiative (CAAFI) for her work in establishing the technical and commercial viability of sustainable aviation biofuels. In 2015 Dr. Holmgren and her team at LanzaTech were awarded the U.S. Environmental Protection Agency Presidential Green Chemistry Award and she was awarded the BIO Rosalind Franklin Award for Leadership in Industrial Biotechnology. Sustainability magazine, Salt, named Dr. Holmgren as the world’s most compassionate business woman in 2015. In October 2015, Dr. Holmgren was awarded the Outstanding Leader Award in Corporate Social Innovation from the YWCA Metropolitan Chicago. Dr. Holmgren was named as #1 of the 100 most influential leaders in the Bioeconomy and LanzaTech was named the Hottest Company in the Bioeconomy by Biofuels Digest for 2016-2017. A TEDx Chicago speaker, Jennifer is also the 2018 recipient of the AIChE Fuels & Petrochemicals Division Award as well as the Biofuels Digest Global Bioenergy Leadership Award.