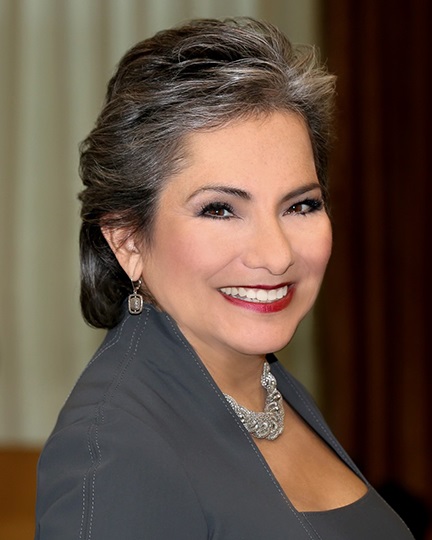 Together We Rise, Chicago Community Trust

Gloria Castillo is president and CEO of Chicago United, a corporate membership organization that promotes multiracial leadership in business to advance parity in economic opportunity.

Under the leadership of Ms. Castillo, Chicago United has launched nationally recognized programs including the annual Changing Color of Leadership Conference and Bridge Awards Dinner, the Business Leaders of Color publications, BoardLink and The Five Forward Initiative.

Ms. Castillo has been recognized for her advocacy of multiracial leadership and, in 2011, she waspresented with the Mexican American Legal Defense and Educational Fund’s (MALDEF) “Corporate Social Responsibility Award,” the Business and Professional People for the Public’s (BPI) “Champion for the Public Interest Award,” and the YWCA of Metropolitan Chicago’s “Racial Justice Award.” Ms.Castillo was a fellow in the 2011 CEO Perspective Program at the Kellogg School of Management at Northwestern University.

Ms. Castillo serves on a joint committee created by Cook County Board President Toni Preckwinkle and Chicago Mayor Rahm Emanuel to enhance City-County cooperation and operational efficiencies. She also serves on the Board of Directors of the Mexican American Legal Defense and Education Fund (MALDEF), The Field Foundation of Illinois, The Chicago Network and World Sports Chicago.

She was an active member of the Chicago 2016 Olympic and Outreach Advisory Committees, serving as chairwoman of the Workforce Development subcommittee. Former Chicago Mayor Richard M. Daley appointed Ms. Castillo to the Board of Directors of the Chicago Workforce Investment Council (CWIC) in June, 2009, and to the City Colleges of Chicago Board of Trustees in July, 2005.

Ms. Castillo is a Resource Board member for the Metropolitan Planning Council and is a member of theEconomic Club of Chicago, the Executives’ Club of Chicago, and The Chicago Network where sheserves on the membership committee. She is listed among the 2012 Crain’s Chicago Business “Who’s Who in Chicago Business,” and was a 1993-1994 fellow of Leadership Greater Chicago.

Prior to joining Chicago United, Ms. Castillo spent over 20 years in advertising and promotions as president of Monarch Marketing Group, Inc.

Throughout her career, Ms. Castillo has participated in various public speaking engagements as a panelist, moderator, and keynote speaker and provided the commencement address at DominicanUniversity’s 2011 graduation.