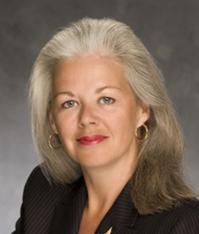 Elaine Leavenworth is Senior Vice President, Chief Marketing and External Affairs Officer. She was appointed to this role in December 2014. Previously, she had served as Abbott’s Vice President, Government Affairs. Ms. Leavenworth joined Abbott in 1991 and held various management positions of increasing responsibility in Abbott’s Nutrition, International, and Health Systems divisions. She was elected a corporate officer in July of 1999.

Ms. Leavenworth serves on the Board of Directors of the U.S. Chamber of Commerce, the board of trustees of the Goodman Theater, the Board of Advisors of the Duke Global Health Institute, the Board of Governors of the Bryce Harlow Foundation, and the Women’s Advisory Board of the Girl Scout Council of the Nation’s Capital. She is a member of the Economic Club of Chicago, The Chicago Network (where she served previously on the board of directors), and the Women’s Forum of Washington, D.C. She is the President of the Abbott Fund, Abbott’s philanthropic foundation, and she also served on the board of the Clara Abbott Foundation from 2005 to 2014.