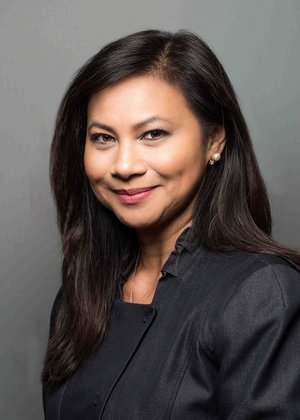 Federation of Philippine Chambers of Commerce

Aurora Abella-Austriaco is a Shareholder at Valentine Austriaco and Bueschel P.C., an all women owned law firm. Prior to that, she was the sole shareholder of Austriaco and Associates Ltd. Austriaco has been in practice for 29 years and concentrates her practice in the areas of business transactions, commercial litigation, real estate litigation, mechanic’s liens, defense of mortgage foreclosure, mortgage fraud (plaintiff), title insurance litigation, declaratory judgment actions, partition actions and other special chancery remedy cases. Her clients range from

multinational corporations, state and federal credit unions, title insurance companies, hotel and restaurant owners, home health care agencies, government agencies and business owners. Prior to owning her own firm, she worked as an associate at Harold I. Levine, Ltd., as in-house counsel for Attorneys’ Title Guaranty Fund and subsequently as Of Counsel to Clark Hill PLC.

Aurora served as past President of the Chicago Bar Association, one of the largest and oldest metropolitan bar association in the country with over 22,000 attorney members and served on the board of the Chicago Bar Foundation. Aurora is serving her 2nd year as President of the Lawyer’s Trust Fund of Illinois (LTF) and as Treasurer of the National Conference of Bar Presidents (NCBP). In August 2017, Aurora was elected Illinois State Delegate to the ABA House of Delegates for a four-year term. She was elected the first female and minority President of the Illinois Real Estate Lawyers’ Association (IRELA) and also served on the board of the Center for Conflict Resolution (CCR). She is a founding board member of the Filipino American Bar Association, past board member and current member of the Asian American Bar Association and past member of the ISBA Real Estate Section Council. Aurora previously served as Chair of the Tellers Committee of the ABA House of Delegates, as past member of the ABA Standing Committee on Meetings and Travel, past Diversity Director for the ABA General Practice Small Solo Division and as member to the ABA Standing Committee on Bar Activities & Services. Aurora was recently appointed to the ABA House Rules and Calendar Committee for the years 2018-2020 and to the ABA Presidential Appointments Committee.

Aurora is a frequent speaker and lecturer at various CLE conferences locally, nationally and internationally. She was a panelist at the 2019 ABOTA-The Case for Civility Today and at the 2018 ISBA’s 6th Annual Minority Bar CLE Conference. Aurora also participated as a panelist at the 2018 ABA Aviation Litigation Conference on “Civility in the Legal Profession.” She was a speaker at the 2017 Tokyo World City Bar Leader’s Conference on “Emerging Practice Areas in the Current Legal Landscape” and was a speaker at the Asian Business Summit Meeting in DC. She has been a speaker at programs hosted by the Chicago Bar Association (CBA), American  Bar Association (ABA), Asian American Bar Association (AABA), ISBA Real Estate Section, ISBA General Practice Section, ABA Real Property Section and ABA General Practice, Small and Solo Division. In April 2015, Aurora was a speaker at the Ethics Seminar in Barcelona, Spain during a joint CBA/Barcelona Bar CLE program. In May 2014, Aurora spoke at the ABA Real Property Probate and Trust Conference in Chicago on “Mixed Use Development” and in February 2013, she spoke at the International Trade Fair of the Legal Profession in Barcelona, Spain and at the Barcelona Bar Association on the topic “Social Role of Lawyers.” In March 2013, Aurora was invited to speak before the Tokyo Bar Association International CLE in Tokyo and was a speaker at the CBA Business Delegation in Manila, Philippines. In May 2013, Aurora spoke at the World City Bar Leaders Conference in Frankfurt, Germany, on “Diversity and Inclusion in the Legal Profession: A Challenge for Law Offices and Their Clients” and “The Role of Lawyers in Resolving the Sovereign Debt and Financial Crisis. In July 2013, Aurora was a speaker at the US Korea (KORUS) Law Day Foundation Conference held in Irvine, CA on the topic of “Diversity Initiatives.”

In addition to her bar association involvement, Aurora is also very active in the community. Aurora was elected School Board Member for the Maine Township District 207 High School Board and was recently appointed Chair of the DePaul University Law School Diversity Council. She also serves as Commissioner for the Illinois Courts Commission, serves on the board of the National Association of Asian American Professionals (NAAAP) and on the board of Asian American Coalition of Chicago (AACC). She is currently serving as the General Counsel for the Federation of Philippine American Chambers of Commerce (FPACC) and serving her 12th year as Chair of the Cook County State’s Attorney’s Asian Advisory Council. Aurora served twelve years as Commissioner for the Cook County Human Rights Commission, nine years as Commissioner for the Park Ridge Planning and Zoning Commission, past President of the Maine South Hawkettes Booster Board and past board member of the Park Ridge Juniors, a group comprised of Park Ridge philanthropic women that raised funds for the not for profit organizations in Park Ridge. Aurora served a two-year term as President of the Asian American Institute now known as Asians Advancing Justice.

In 2006, Aurora was elected to the Corporate Board of Attorneys’ Title Guaranty Fund, Inc. (ATGF), a national bar related title insurance company and in 2020, was appointed to the Executive Committee of ATGF. IN 2010 Aurora was appointed Chairman of the Board of ATG Legal Serve, a subsidiary of ATGF and in 2012, Aurora served on the Governance Board of Presence Health Systems St. Joseph’s Hospital.

On April 18, 2009, Aurora was recognized by the Philippine Chamber of Commerce as one of the “Ten Most Outstanding Filipino American Businessmen” and on April 22, 2009, Aurora was one of the recipients of the CBA “Vanguard Award” which honors individuals and institutions who helped promote diversity and inclusion in the legal profession and have made the legal profession more reflective of the community. On November 21, 2010, Aurora received the Asian Chronicle USA “Distinguished Young Asian Professional Award.” Aurora served as the 2010 Asian American Coalition Event Chair which was hosted by the Filipino Community in January 2010 and attended by over 1,300 people. The Asian American Coalition is an organization comprising of all the Asian communities in Chicago which includes the Filipinos, Japanese, Chinese, Koreans, Bangladesh, Pakistani, Thai, Laotians, Vietnamese, Indians and Malaysians.

In 2013, Aurora was named one of “100 Women of Influence in Chicago” by Today’s Chicago Woman and twice as one of “100 Women Making a Difference.” In September 2013, Aurora was awarded the “Sister Margaret Traxler” Award by the Institute of Women Today (IWT) for her years of pro bono work on behalf of IWT. In May 2006, Aurora received the CBA Alliance for Women “Alta Mae Hulett” award, a prestigious award given to women lawyers who have significantly contributed to the advancement of women in the profession. In the same year, Aurora received the 2006 Philippine Chamber of Commerce “Excellence in Law” award. In 2008, Aurora received the “Distinguished Service” Award from Cook County State’s Attorney, Richard Devine for her service as Chair of the Asian Advisory Council. On June 5, 2008, Aurora also received the ABA Council on Legal Education Opportunity (CLEO) “Legacy Justice Fund.” The CLEO award recognizes members of the legal community whose efforts and activities serve to advance the cause of diversity within the legal profession.

On February 28, 2015, Aurora was the recipient of the prestigious Asian American Coalition of Chicago Lunar New Year Dinner “Ping Tom Memorial” Award; was recognized in 2015 as one of “2015 Global FWN100™ Awardees” by the Filipina Women’s Network in San Francisco and in November 2015, was awarded the “Chicago Filipino Asian American Hall of Fame” Award.

In November 2015, Aurora in partnership with the U.S. Department of Commerce and Minority Business Development Administration helped organize a successful delegation of twenty-eight (28) Small Medium Enterprisers (SMEs) to serve as US Delegates to the Asian Pacific Economic Council (APEC) Summit which was held in Manila, Philippines. On May 20, 2014, Aurora was invited to participate in the White House Initiative on Asian Americans and Pacific Islanders and the U.S. Agency for International Development “Post-Typhoon Haiyan Roundtable.” In February 2013, Aurora was the key note speaker for the 2013 Asian American Lunar New Year Gala, the largest gathering of Asian American community and business leaders in the country. On June 8, 2013, Aurora was the keynote speaker for the Philippine Independence Week Gala event.

In June of 2019, Aurora was recognized as one of Chicago United’s “50 Business Leaders of Color.”

On March 8, 2020, Aurora will be recognized as one of the Top 20 Global Women of Excellence by the 7th Congressional District Multi Ethnic Task Force in celebration of International Women’s Day.

Aurora is fluent in Tagalog. She is married to Dr. Jerome Austriaco and they have 2 girls, Danielle and Isabelle.