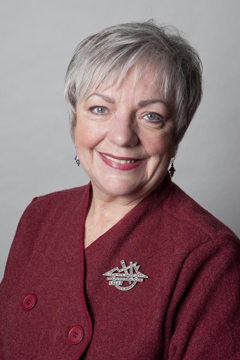 Joyce Simon joined the John G. Shedd Aquarium in Chicago in 1992 as its first Chief Financial Officer; she also serves as the Secretary-Treasurer of the Shedd Aquarium Society, the not-for-profit corporation that owns and operates the Aquarium. The Aquarium, which opened in 1930, is one of the largest indoor aquariums in the world and the most visited cultural attraction in the city of Chicago.

Since coming to the Aquarium, Ms. Simon has overseen several public bond issuances in support of major capital renovation and expansion programs. She has worked successfully with bankers and rating agencies to obtain a stand-alone rating for the Aquarium, one of the few cultural institutions to be so recognized. Since 1995, she has been a key participant in the development and implementation of a facility master plan to help ensure a unified approach to renovations to the Aquarium, which is included on the National Register of Historic Buildings. Her involvement has included the negotiation of contracts and oversight of numerous consultants, architects, engineers, construction manager and trades. Construction of Phase 1 of the plan, with a total cost of approximately $93 million, was completed in 2002. Phase 2 of the plan was completed in 2009 at a cost of $79 million.

Before joining the Aquarium, Ms. Simon was a partner with Ernst & Young, one of the “Big 4” international professional services firms. At E&Y she worked with clients in a variety of industries ranging from securities broker-dealers to aerospace and defense contractors to financial holding companies. Ms. Simon was involved in numerous successful initial public offerings, debt and equity public offerings, private placements and swaps for various clients. This included participation in drafting and due diligence sessions as well as coordination with attorneys, underwriters, SEC, regulatory agencies and E & Y offices around the world. She also participated in due diligence reviews of acquisition candidates on behalf of potential buyers and in various divestiture negotiations to maintain sales prices of operations being sold or spun off. She was a frequent speaker on technical and managerial topics for firm, client and other conferences. Ms. Simon also served as the primary conference leader for the firm’s Midwest region on SEC and public filing matters.

In a previous life, she was a social worker working at Cook County Hospital and the North Lawndale area of Chicago.

Civic, Professional and Other Interests:

Ms. Simon has been an active participant in professional and non-profit organizations. As president of the American Woman’s Society of Certified Public Accountants, she traveled across the country speaking to professional organizations, business leaders, students, and the media on such topics as career planning, the glass ceiling, and diversity in the workplace. She was selected by the American Institute of Certified Public Accountants to serve on The Group of 100, which identified and prioritized environmental issues and trends that will impact the future of the CPA profession and for which action plans must be developed by the AICPA. Ms. Simon also served as treasurer of the YWCA of Metropolitan Chicago (a $13 million social service agency), where she was recognized with the Outstanding Board Member award twice. She has also held volunteer leadership positions in several non-profit organizations, including the Illinois CPA Society, Chicago Finance Exchange and the Illinois Spina Bifida Society. Ms. Simon is also a frequent speaker on behalf of the University of Chicago Booth School of Business.

At the present time, she is a member of the board of directors of a publicly-owned community bank holding company. She sits on the company’s audit and compensation committees and is chairman of the Governance and Nominating Committee.

Ms. Simon is married to Douglas Emde, who is the president of his own real estate investment and management company. The couple lives in the Tri-Taylor area of the near-west side of Chicago and has two adult children.

Ms. Simon has an MBA, Finance and Accounting (specialization in Industrial Relations), from the Booth School of Business and an AB, Political Science, from The College of The University of Chicago. She is a CPA, licensed in the State of Illinois.