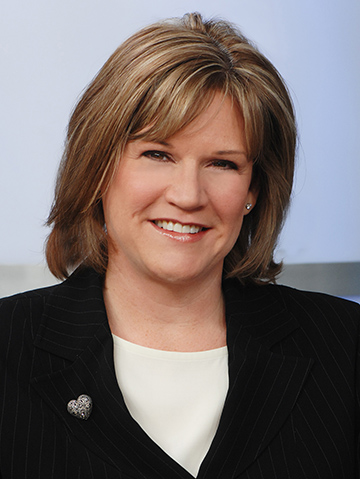 Jennifer L. Graves has been at the helm of Chicago’s top-rated news organization since October 2001, when she was promoted to the position of Vice President of News,    ABC 7 Eyewitness News.  Under her leadership, ABC 7 has been Chicago’s choice for news, claiming more top-rated newscasts than any other station in the market.

In her role as Vice President of News, Graves directs the station’s 24/7 news coverage for all on-air and digital platforms.  She oversees everything from breaking news and major event coverage to political debates, half-hour news specials and day-to-day news planning. She manages more than 100 employees. During her tenure, ABC 7 Eyewitness News has been honored for excellence with numerous awards including Associated Press, local Emmy and Peter Lisagor Awards, as well as a National Emmy Award for investigative news reporting and numerous Illinois Broadcasters Association Awards.

Graves has been a major contributor to the station’s cutting edge technological advances including the recent installation of ABC 7’s state-of-the art news set, an all-digital newsroom, High Definition news and the development of the historic broadcast facility, the State Street Studio.

Before joining ABC 7, Graves was at WAGA-TV News in Atlanta, Georgia, from 1988-1992, where she was promoted from news producer to executive producer.  Prior to that, she worked as a producer and assignment editor at KSDK-TV in St. Louis, Missouri.

Graves is a member of the Radio Television Digital News Association and The Chicago Network, a women’s business leadership organization.

She graduated from the University of Missouri-Columbia with a Bachelor of Journalism degree.

Graves lives with her husband and twin daughters in the north suburbs.