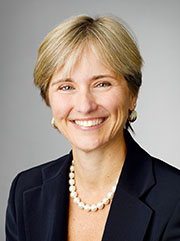 The J.B. and M.K. Pritzker Family Foundation is a private foundation committed to innovative strategies for solving society’s most challenging problems. As President, Janet Froetscher develops strategy and drives its implementation to create results supporting the Foundation’s priorities in early childhood development, healthcare and civil rights which are the three cornerstones of the Foundation.

Ms. Froetscher is the former CEO of Special Olympics, leading the organization in all of its functions to fulfill the mission of full inclusion for people with intellectual disabilities. She led a global team with operations and affiliates in more than 170 countries. During her tenure, Ms. Froetscher led the growth of the movement to more than 5 million athletes, holding more than 94,000 competitions annually, and including more than one million coaches and volunteers.

From 2008 to 2013, Ms. Froetscher was the President and CEO of the National Safety Council (NSC), an organization whose mission is to save lives and prevent injuries. Under her leadership, NSC created a new strategy and implemented initiatives which saved over 10,000 lives and prevented over 1 million injuries by focusing on issues such as workplace safety, distracted and teen driving.

From 2003 to 2008, Ms. Froetscher was CEO of the United Way of Metropolitan Chicago where she led the merger of 54 United Ways into a single entity, the largest merger of a non-profit in the country. She also served as COO of the Aspen Institute where she also led the leadership development business and the strategic planning effort. Prior to that she was Executive Director of the non-profit consulting arm of the Commercial Club of Chicago bringing business expertise to City of Chicago government and the Chicago Board of Education generating enormous improvements in service and reducing costs by hundreds of millions of dollars. Her corporate experience includes account management, credit and syndications roles at Bankers Trust Company and First National Bank of Chicago.

Ms. Froetscher holds a bachelor’s degree from the University of Virginia and an MBA from the Kellogg Graduate School of Management of Northwestern University both with high distinction. She is a Board member of the Chicago Board Options Exchange (NASDAQ: CBOE) where she chaired the Nominating and Governance Committee, and a member of the Chicago Network and Commercial Club of Chicago. Ms. Froetscher is also a Henry Crown Fellow of the Aspen Institute.