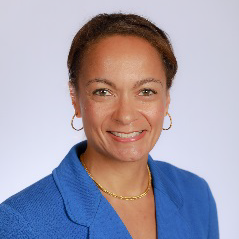 Dr. Thompson is the Lauren D. Holinger Professor and Chair of Pediatric Otolaryngology at the Ann & Robert H. Lurie Children’s Hospital of Chicago and Northwestern University Feinberg School of Medicine. She received undergraduate and medical degrees at the 6 Year BA/MD program at the University of Missouri-Kansas City. She is uniquely fellowship trained in both laryngology and pediatric otolaryngology.

Including a faculty position, residency and a laryngology/dysphagia clinical outcomes research fellowship she spent 18 years of her career at the Mayo Clinic and was the founding chair of the Division of Pediatric Otolaryngology. A portion of her career was spent at the University of Cincinnati College of Medicine and Cincinnati Children’s Hospital as fellow under the direction of Dr. Robin Cotton, and later served on the faculty as the Director of the Adult Airway Reconstruction Program and member of the Pediatric Aerodigestive & Sleep Center.

She has a unique hybrid of expertise in the surgical treatment and management of airway, voice, and swallowing disorders for infants, children, and adults. She was the President of the ABEA during the centennial year celebration. She is a member of the Triological Society Council and was the Society’s 2006 recipient of the Harris Mosher Award for excellence in clinical research for her work on Laryngomalacia, and is considered one of the world’s authorities on the topic. She was the 2013 AAO-HNS Helen F. Krause, MD Trailblazer awardee, and the recipient of the 2015 Gabriel Tucker award from the ALA for outstanding career contributions to pediatric laryngology. She was 2018 Guest of Honor at the Triological Society where she was the first woman to deliver the prestigious Ogura Keynote address. She is member of American Academy of Otolaryngology – Head and Neck Surgery (AAO-HNS), the Triological Society, American Laryngological Association (ALA), the American Bronchoesophagological Association (ABEA) American Society of Pediatric Otolaryngology (ASPO), National Medical Association, American College of Surgeons (ACS) and others. She has published over 70 scientific articles and 15 book chapters.

As a surgeon administrator she serves as the Vice Chair for the Department of Pediatric Surgery and the Executive Physician Director for Ambulatory Practice at Lurie Children’s Hospital where she is committed to the creation and operationalizing of care delivery models to optimize access for equitable and fiscally responsible care for children.