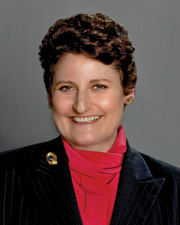 Andrea S. Kramer is a partner in the international law firm of McDermott Will & Emery LLP. She is based in its Chicago office and heads its Financial Products, Trading, and Derivatives Group. She is a founding member of the Firm’s Diversity Committee and founding chair and chair emerita of the Gender Diversity Subcommittee. Andie previously served on both the Firm’s Management Committee and Compensation Committee.

Andie consistently demonstrates her commitment to improving gender diversity and equality in professional service firms. She, along with her husband Al Harris, wrote the book Breaking Through Bias – Communication Techniques for Women to Succeed at Work (Bibliomotion 2016). Breaking Through Bias was named one of the best business books of 2016 by Women@Work. Publishers Weekly called Breaking Through Bias “a well-organized, well-thought-out call to action.” Andie and Al have written over 150 articles and blog posts on ways to overcome gender bias and increase gender equality in American workplaces. Andie and Al’s blog can be found at www.AndieandAl.com/blog. Andie is also a co-author of What You Need to Know about Negotiating Compensation, a 2013 guide published by the ABA Task Force on Gender Equality.

Andie was selected to Chicago’s Notable Women Lawyer List for 2018 by Crain’s Chicago Media. She was named one of the 50 Most Influential Women Lawyers in America by the National Law Journal and by Crain’s Chicago as one of the Most Influential Women Lawyers in Chicago. She was profiled in the Chicago Lawyer magazine as an “inspiring innovator” and as the first in its series on “members of the legal community who think outside the box and inspire their colleagues.” She was featured as a “Remarkable Woman” by the Chicago Tribune as a “Top Lawyer with a Corner Office” with a “Penchant for Platypuses and a Dream of Gender Equality.” Some of Andie’s honors and accolades include the Leadership Recognition Award by the Women’s Bar Association of Illinois (WBAI); the Inspiration Award from the Coalition of Women in Law; the Top Women Lawyers in Leadership Award from the WBAI; the POW Award from Womenetics; the ChambersUSA Gender Diversity Lawyer of the Year (Private Practice); the 2013 Founder’s Award (Chicago Bar Association, Alliance for Women); and 2011 Women with Vision Award (WBAI). Andie has spoken at more than 200 national diversity conferences, trade association meetings, professional service firms, multinational corporations, podcasts, and webinars on the importance of assuring women equal access to career opportunities and leadership roles.