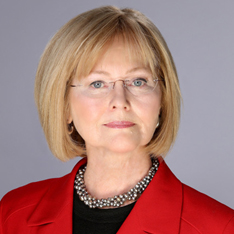 After executive staff roles at large corporations, Peterson launched a $500 million technologically focused business inside a $25B company, ran a US subsidiary for a $20B multinational tech manufacturer, and founded, built, and sold a business to a public company.

She likes to create the vision, strategies, marketing, people, capital structure, and processes to grow profitably. Peterson is experienced in assembling high-performing teams, working effectively with strategic partners, leading employee groups, and communicating effectively both inside and outside the company.

Peterson has served on public company boards since 1996, including 360 Communications (Alltel), Hanesbrands, Navistar Financial, TBC Corporation, Fleming Companies, and Williams Partners. She has also served on a number of non-profit and private company boards.

Prior roles: executive positions at PepsiCo, Kraft, Sears, and Research in Motion. Launched and ran Sears Online in 1999, overseeing growth from zero to $500 million in e-commerce revenues in 18 months. Vice President and Treasurer of Sears, Roebuck and Co. from 1993 through 1998. Played a key role in the company’s strategic transformation, including the IPOs and spin-offs of Allstate and Dean Witter Discover, and divestitures of Prodigy and Coldwell Banker. Previously held strategy, investing, corporate finance and treasury positions at PepsiCo and Kraft.

M.B.A. from Vanderbilt University’s Owen Graduate School of Management, and a B.A. from the University of Louisville.